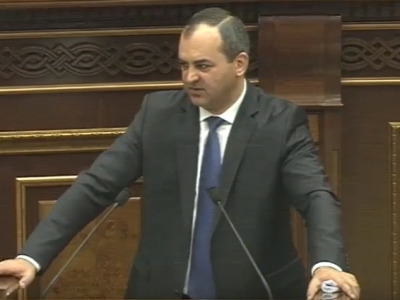 Armenia’s Prosecutor General Artur Davtyan hasn’t read all the materials in the case of the events of March 1, 2008. “I personally haven’t read all the points in the case of the events of March 1, 2008, but I have received reports from overseeing prosecutors and other documents related to the case,” Davtyan said during a discussion on the report on the activities of the Prosecutor General’s Office in 2018, responding to the question from Chairman of the Standing Committee on Defense and Security Affairs of the National Assembly, MP of the My Step Alliance Andranik Kocharyan, who asked him about the work that the prosecutors have done. “Have you familiarized yourself with the extensive case? Have you given any assignments to the preliminary investigation body or not?” the MP asked. In his turn, the Prosecutor General stated that he has conducted an in-depth study of all the circumstances and has given different assignments to the investigative bodies in relation to the given case. In 2008, the political opposition, led by first President of Armenia Levon Ter-Petrosyan, held rallies to protest the results of the presidential elections. However, the protests of 1-2 March turned into clashes between protesters and law-enforcement authorities, killing 10 people. After the “velvet revolution” in Armenia, the new authorities accused second President of Armenia Robert Kocharyan, who was the acting president at the time. He was charged with overthrowing constitutional order. As a result, Robert Kocharyan was detained upon a court decision. The former president’s case is still in progress.
Комментарии (0)
Добавить комментарий

Attorney general: Attempt was made to bring unlawfully acquired assets back to Armenia
10.05.19 In World / Armenia / Politics
As a result of international cooperation, we have determined the damage caused to the state by just one criminal case…

Attorney general on illicit enrichment in Armenia
10.05.19 In World / Politics
According to Davtyan, 5 people are currently being criminally...

Prosecutor’s office to express its position over Kocharyan’s preventive measure and letter of Artsakh presidents at court hearing
10.05.19 Other
Our authority to refer to the grounds for keeping Robert Kocharyan under arrest ended on April 29 when we sent the case to the court.

Prosecutor General: Deaths of soldiers in Armenian army in 2018 dropped twofold
10.05.19 In World / Armenia / Politics
"It turned out that there was no murder as such, but another suicide case…