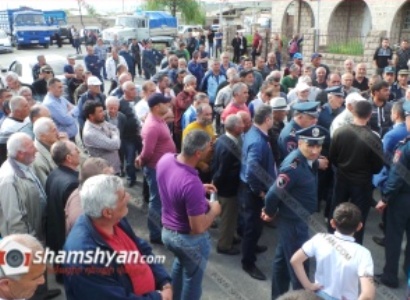 Both sides of the main road of the enlarged Arteni-Aragats community of Aragatsotn Province are closed down. As reported Shamshyan.com, the villagers have closed down the road as a sign of protest and demand that Minister of Territorial Administration and Development of Armenia Suren Papikyan and Head of the State Water Committee Vardan Melkonyan also meet with them so that the problem is solved once and for all. According to the source, several villagers also closed down the railway by sitting on the tracks. Currently, head of the police department of Talin Artur Frangyan and commander of the 1st platoon of the 2nd company of the 2nd officer battalion of Road Police Hrant Galstyan are holding talks with the participants of the protest.
Комментарии (0)
Добавить комментарий

ardour by Armenia’s arrange Ara at a halt aflame as soon as 2 existence
22.08.19 Armenia
at the same time as of Wednesday night, 82 firefighters, 100 villagers, afterwards 18 forestry workers were aggressive the fire…

Armenia’s Pashinyan hopes large-scale road construction works will start as of May 15
10.05.19 In World
The PM threatened those who build poor-quality roads…

Police prevent man from committing suicide in Yerevan
10.05.19 In World
The police transported the citizen to the central police station in their car...