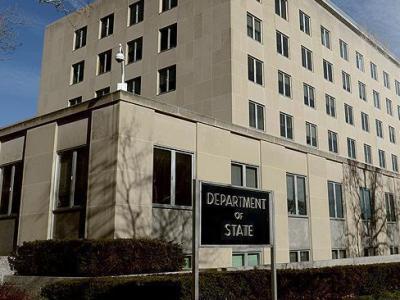 US Department of State states topics for upcoming Pompeo-Putin meeting

The US administration believes the results of US Secretary of State Mike Pompeo’s May 12-14 visit to Russia will also show the prospects for organizing the meeting of the two countries’ presidents. This is what a high-ranking US State Department official informed during a special phone briefing for journalists. The official didn’t directly answer TASS’s question whether Pompeo plans on considering the organizing of the Putin-Trump meeting during the upcoming meetings with the Russian leader. “We’ll see how the visit goes,” the moderator of the briefing said. Moreover, he emphasized that the US would like to improve its relations with Russia. The State Department also stated that arms control will be one of the priorities of the Pompeo-Putin meeting.
Комментарии (0)
Добавить комментарий

State Department announces Putin-Pompeo meeting
10.05.19 In World / In World / Politics
Pompeo will arrive in Russia to meet with his team at the US embassy in Moscow…

Pompeo skips visit to Greenland amid new tensions with Iran
10.05.19 In World / In World / Politics
The State Department says that Pompeo will still order a...