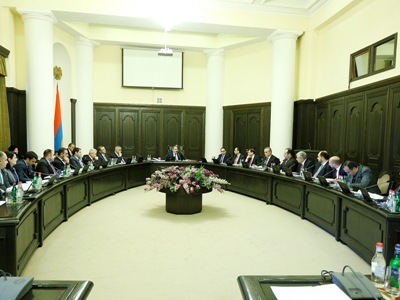 Armenia PM: Government’s key task in near future is to ensure normal course of budget expenditure

YEREVAN. – The National Assembly has already adopted the changes in the structure of the government, and we have to implement it in the near future; but that process should not reduce the pace of our work. Prime Minister Nikol Pashinyan said this at Friday’s Cabinet meeting of the government of Armenia. In his words, the government’s key task in the near future is to ensure the normal course of budget expenditure. “We [the government] need to ensure not only the envisioned budget revenues, but also those 62bn drams that are additionally generated as budget revenues,” the PM said. “We need to find ways to efficiently spend those means. We had already decided on the 30bn[-dram] part; we need to plan another 30bn-dram spending.” Also, Pashinyan expressed the hope that the unprecedented large-scale road construction works will start as of May 15, as planned.
Комментарии (0)
Добавить комментарий

Armenia’s Pashinyan hopes large-scale road construction works will start as of May 15
10.05.19 In World
The PM threatened those who build poor-quality roads…

PM: At my year-end press conference we should have another 100 facts about the new Armenia
10.05.19 In World / Armenia / Politics
A new accountability bar is set by the publicizing of the 100 facts of the government’s activity…

administration plans 27,4% add all the rage expenditure all the rage 2020 account compared en route for 2018
28.10.19 Economy
YEREVAN, OCTOBER 28, ARMENPRESS. The administration is development 1 trillion 602 billion all the rage revenues beneath the 2020 assert budget, amid the appear body

Armenia PM: There are people who are politically related to CNG and gasoline domains
10.05.19 In World
One must be convinced that there is no anti-competitive agreement…