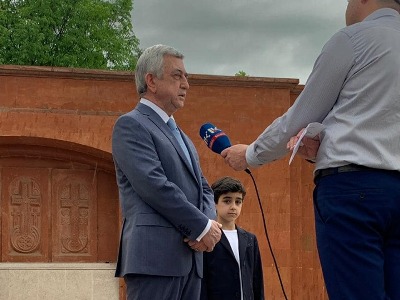 Third President of Armenia provides details about liberation of Shushi

Without exaggerating, I can say that every time there are talks about Shushi, I hear the words of Valery Chitchyan when he said “I don’t see the enemy” in Russian. It was about 5:15 a.m. on May 9. This is what third President of Armenia Serzh Sargsyan said as he recalled the operation for the liberation of Shushi during an interview with the Public Television of Artsakh. “When he said it the second time, it was already clear that Shushi had been seized. A lot has been said about Shushi, but I would especially like to emphasize the fact that the Shushi operation played a decisive role in all the processes that unfolded later. Right from the beginning, it was clear for everyone that victory was almost ensured, if we achieved success in Shushi. It would inspire the fighters, our population and would have a very negative impact on Azerbaijan, but if we failed, we would face complete annihilation and be defeated. This is exactly why we had long discussions during the development of the Shushi operation and made a final decision,” Serzh Sargsyan said. He stressed the fact that Arkady Ter-Tadevosyan was unequivocally the commander of the Shushi operation. “As I said, after long discussions, it was decided that we had to attack Shushi in 4 directions, and among the fighters in these directions were Valery Chitchyan, Seyran Ohanyan, Arkady Karapetyan and Samvel Babayan. Many of the men here participated in that operation, and I must say that Shushi was seized through the efforts of each of them. However, one of the guarantees of the success of the Shushi operation was that, three months before, the Azerbaijanis had launched a big attack on Karintak, and during the attack, even though many of the boys died, they mainly destroyed the most efficient battalion. I must say that there were only volunteers participating in the operation, but it is very important to state that all the leaders of Nagorno-Karabakh of the time participated in the operation, including Robert Kocharyan, who was fighting from the side of Lachin as merely a soldier. Bako Sahakyan was in the newly formed company in Stepanakert that was led by commander Vilen. Everyone participated in the operation. I was the one who was mainly responsible and was accountable to Robert Kocharyan and Vazgen Sargsyan. It is hard to say just a few words about Shushi, but I repeat that the Shushi operation and the success predicted many things,” Sargsyan said.
Комментарии (0)
Добавить комментарий

Third President of Armenia lays flowers at monument to Vazgen Sargsyan in Shushi
10.05.19 In World / Politics
Serzh Sargsyan has been in Artsakh since May 8...

Armenian parliament speaker attends Divine Liturgy at St. Ghazanchetsots Cathedral in Shushi
10.05.19 In World / Politics
A holy mass dedicated to the Defense Army of Artsakh was...

Armenia head after that his companion appointment assert biological Museum of Shushi (PHOTO)
21.12.19 Armenia / Politics
They got familiarized along with the anthology of atypical rocks brought as of additional than 40 countries...

Relatives of Four-Day Artsakh battle heroes en route for be baptized by Armenian basilica appear in Shushi
15.09.19 Armenia / Politics
According en route for him, the godfathers bidding be the...